How do suicide rates respond to elections

In Australia we have a federal election in two weeks.

A way to test the social integration theory of suicide posited by Durkheim in 1897. This theory suggests that the degree of social integration effects the propensity to commit suicide. Individuals who are only loosely connected to others in a society are at an increased risk of suicide. One way people display their attachment to a society is by participating in ceremonies that reflect common sentiments of the society. Every group of people has ceremonies that unite its members and expressed its shared ideals. These ceremonies foster greater integration by providing an opportunity for members to reaffirm their attachment. 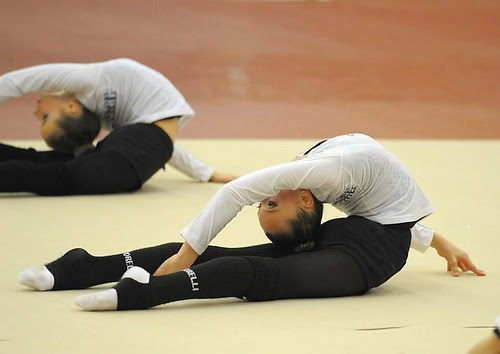 Elections serve not only the functional role of assigning governance but also celebrates a mutual belief in liberty and self determination. Research in 1973 has shown that in the United States, in presidential election years there was statistically significant fewer number of suicides compared to the same months in non election years.

This type of research supports the large body of research that shows during wars the suicide rate of a society tends to go down which some have said supports Durkheim’s theory of suicide. 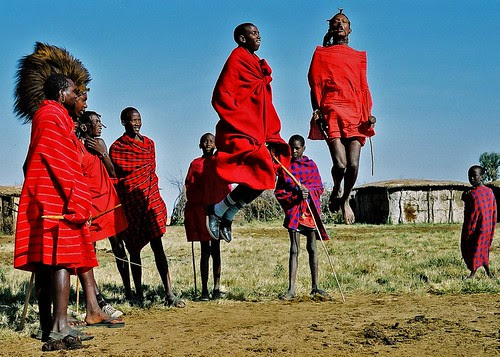 This of course highlights the need for governments to have policies that enhance local social networks that exist and to develop new ways and types of social networking. After natural disasters encouraging families to move out of the area would seem to be contra-indicated.

Also raised is the area of networking through social media and can this have an impact on the degree of social integration experienced by people belonging to that network.

Graffiti
Posted by Tony White at 8:38 PM No comments:

OCD and self soothing 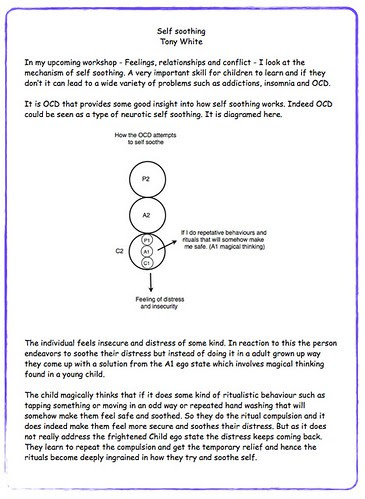 Graffiti
Posted by Tony White at 3:28 PM No comments:

The DSM-5 includes gambling addiction in the substance-related and addictive disorders along with the drug and alcohol addictions. Whilst this could be seen as a widely held belief that gambling should be included in such a category along with drugs and alcohol it does have some difficulties. 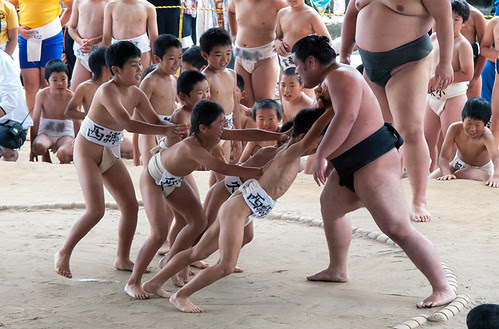 The person forms a symbiosis with the drug where the drug takes over the Parent (and to a lesser extent Adult) ego state functions.  Most obvious is the soothing effects of the Parent ego state. Dependent drug users are notoriously poor at self soothing. Drugs are very effective at soothing the drug user.

In normal development a young child uses mother's Nurturing Parent ego state to soothe itself and then it learns to self soothe as it grows. Dependent drug users don't learn to do this and hence needs an outside 'thing' to do it for them and hence the drug fills that role.

In gambling there is no where near the same soothing effect. At the very best there may be a kind of mild soothing effect in the act of gambling for some but compared to the soothing that heroin can provide it is next to nothing. Hence the gambling addict does not form a symbiosis with the act of gambling in the same way a drug addict develops a symbiosis with the drug. Thus we see one very crucial difference between the gambling addict and the drug addict and why it could be seen as erroneous to include them in the same category as the DSM-5 does.

Doing nothing
Over adaptation
Agitation
Violence or incapacitation

I am now going to contradict myself in what I said in gambling addition 1. In that post I said gamblers do not seek to form a symbiosis with another in the same way a drug addict does. The drug addict seeks to use another's Nurturing Parent ego state to self soothe whereas the gambling addict does not as gambling does not have the same soothing effect that drugs do.

Having said that, I now say that a gambling addiction could be seen as a passive behaviour and as we know the purpose of a person behaving in such a passive way is to form a symbiosis with another person. In my hypothesis the gambling addict has a very strong drive to do such a thing but in a different way to the drug addict.

A gambling addiction could be seen as a form of incapacitation. The person gets them self into a position where they are incapacitated and then some one else of some organization comes along and looks after them. 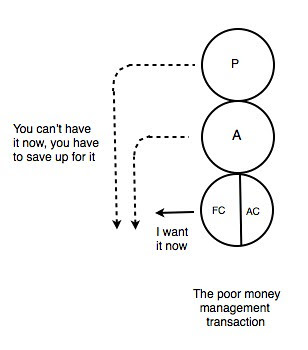 This leads to a state of incapacitation where the gambler ends up with high levels of debt. Satisfactory money management is so central to one existing in a society such that the gambler will eventually end up with some other person or some other organization managing their money for them and hence we have a symbiosis formed. The incapacitation leads to the symbiosis being formed. For example the man with a gambling problem may have all his pay put directly into his wife’s account and then she gives him a little bit of “pocket money” each day for him to spend.

The excessive drug user also can be childlike and irresponsible and have another person around them being the responsible one. However the consequences of the irresponsibility are not so dramatic. If the husband gets drunk, comes home and vomits on the floor in front of the angry wife then that is irresponsible behaviour. But a marital couple can live with that. If the man goes to the casino and looses $5,000 then a couple cannot live with that. If that happens over and over the consequences are far greater than if the husband comes home drunk over and over. The need to control the out of control gambling is far greater than the need to control the out of control drinking. Hence the need for a symbiosis is far greater for the gambler than for the drug user. 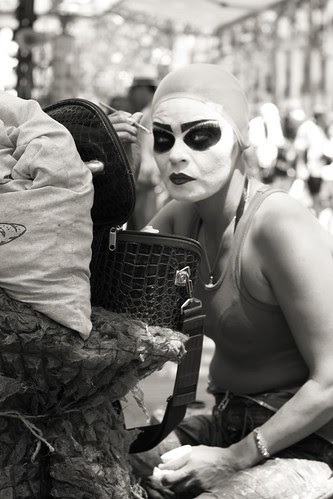 Posted by Tony White at 8:29 PM No comments: 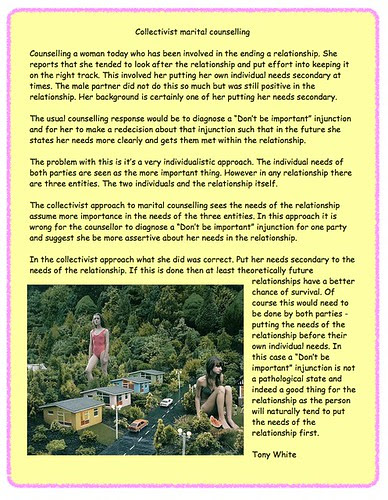 Graffiti
Posted by Tony White at 9:20 AM 4 comments: 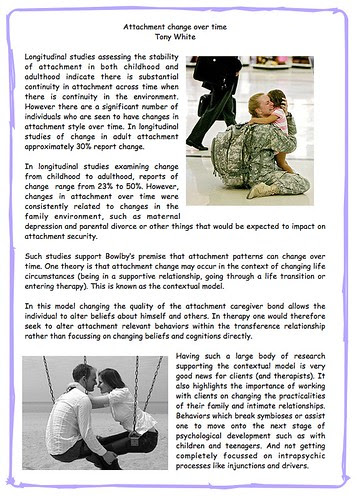 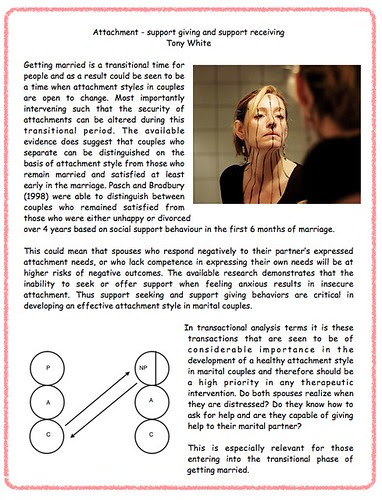 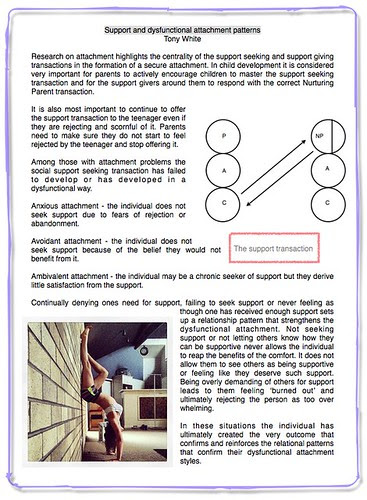 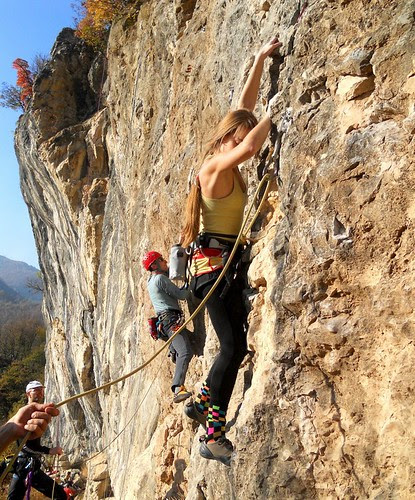 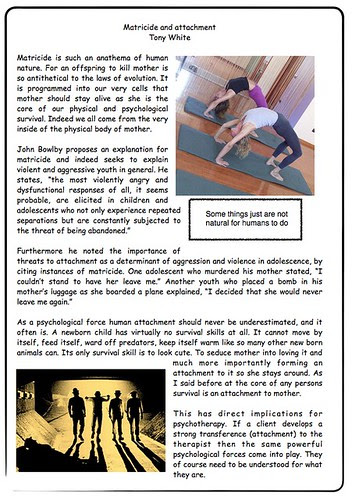 Graffiti
Posted by Tony White at 9:22 AM No comments:

Attachment styles and drug use 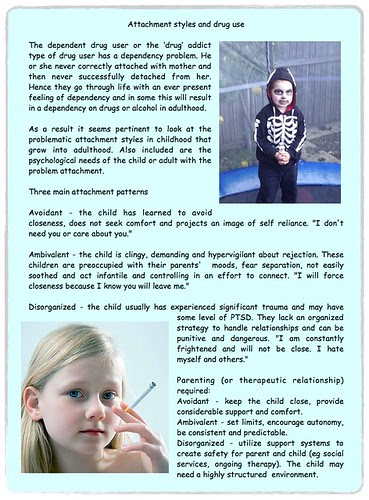 Graffiti
Posted by Tony White at 9:21 AM No comments: